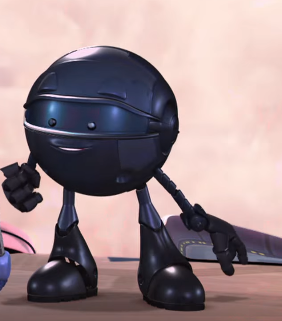 Tinny is a kei'zatsu bot-tot, not to mention Spin and Penny's best friend. He often hangs around the FCPD with the two and helps Spin a lot when he needs it.

Force field and energy balls: A new bot-mod Tinny discovered he had in episode 26. Not much is known about why he has them. More may be revealed about it in season 2.

Visor: His visor doesn't do much except show his eyes. Although it has been show that he can make it glow and use it to see in the dark.

Sound Scaper Prototype: Acts like an inferred camera and projects onto a holographic display. Allows you to check bots for injuries or show invisible Fangbots.

Prototype invisibility BotMod: A yellow energy disk that allows the user to become invisible. Now in the possession of the Tensai.

Magnetic resonance blaster; A rifle like BotMod that "can locate electromagnet [a] single and detonate a charge [to] destroy it".

Tinny is a bot-tot, so he is quite small, just about the size of an average tensai. He is gray with a kei'zatsu symbol on his left leg. Instead of eyes, he has a blue visor which digitally shows his eyes, which are black. From a side view the top of his head gives off the apearance of him wearing a baseball cap.

Retrieved from "https://rollbots.fandom.com/wiki/Tinny?oldid=4200"
Community content is available under CC-BY-SA unless otherwise noted.